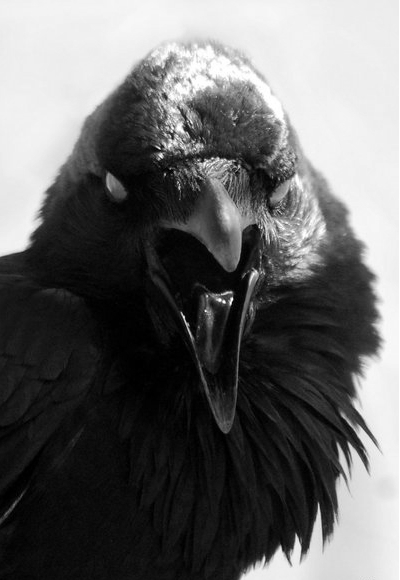 When one thinks about the shortlist of halloween familiars, owls, cats, hobgoblins none really carry as foreboding a presence as the humble Crow.  Crows are large birds of the genus Corvus. Corvids can be found all over the world except southern S. America, the Poles and various islands. They are believed to have originated in central Asia and species diversity is still high there. The oldest corvid fossils have been found in Europe from 20-25 million years ago; from an ancestor called the Miocene.

Corvidae have proven time and time again that they are capable for complex cognition. Quite simply they can work out problems as humans do.  They are capable of long term memory and can easily recognize faces and vocal patterns.  They are absolutely fearless. They have been known to chase bald or golden eagles. On other occasions, they’ll pick up and drop stones, pinecones or sticks on predators or people they come in contact with.  The Common Raven (Corvus Corax) can even be taught to speak as you might a parrot. Crows are emotional animals, too. They react to hunger and invasion by vigorously vocalizing their feelings. They display happiness, anger and sadness.

Corvids live between 7 and 14 years depending on species. These birds are often considered a nuisance species in North America. Scavenging human carrion and their glossy black coloration has led to historical prejudice towards the birds. Some still associate them with evil, describing flocks as a ‘terror of ravens’. However, they are held in high regard by aboriginal people worldwide. The raven’s keen intelligence led some early cultures to believe the birds can predict the future. This linked ravens to the supernatural and the afterlife.

There are numerous myths about ravens. The earliest raven references involve the Norse god Odin. He sent two ravens to fly around the world each day and report everything they saw. Noah also sent a raven from the Ark to look for land. In Chinese, Egyptian, Greek and Semitic myths, the raven is a messenger of bad or stormy weather. In Sweden, they represent the ghosts of murdered people. In Germany, they are symbols of eternally damned souls.

Most importantly, in keeping with the Halloween season, In Irish Celtic folklore, ravens were mediators between the gods and the mortals. They would bring prophecies and messages between the realm of the gods and Earth. The Celtic goddess Morrigan takes the form of a raven to visit those who will soon die on the battlefield.

So the next time you see a Crow staring at you remember that corvids are smarter than you think. Happy Halloween!