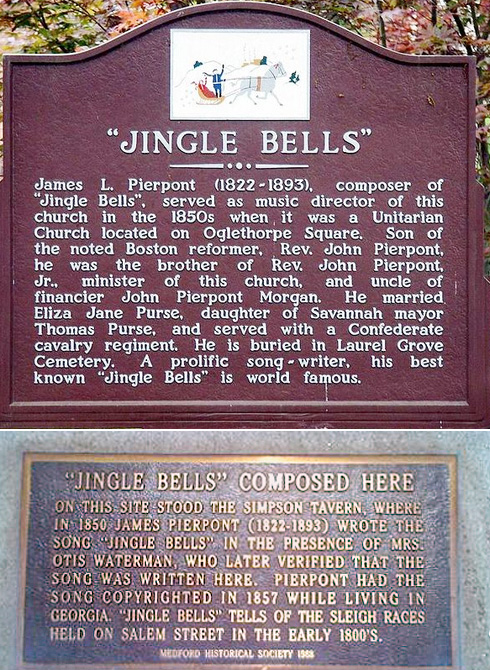 This topic has been blogged to death, however, it’s new to me.  If you have been a reader of my blog for a while you know I try to learn something new about our ever skewed American holidays each year.  This thanksgiving I have found what I think is a super interesting topic.

James Lord Pierpont’s name may sound familiar as he is the uncle of John Pierpont Morgan of financial notoriety. (Yes that J.P. Morgan)  He was a songwriter, composer, arranger and organist back in the mid to late 1800s.  His major claim to fame is a little song called One Horse Open Sleigh.  Now you may think to yourself “that sounds oddly familiar”. You might even make the connection between the songs title and the lyrics of a pretty common xmas tune.  What you and I likely both missed is the fact that the song was actually written at Thanksgiving and was intended as a New England thanksgiving tune.

Back in 1850 or 1851, Mr. Pierpont was known to frequent the Simpson Tavern in Medford, Massachusetts, which was at the time, known far and wide for its famous sleigh races to neighboring Malden Square. One evening, whilst perhaps enjoying a little holiday cheer, these races inspired him to write a tune. The story goes that Pierpont picked out the song on the piano belonging to the owner of the boarding house attached to the tavern because he wanted something to play for Thanksgiving at his Sunday school class in Boston. The resulting song wasn’t just a hit with the kids; adults loved it so much that the lyrics to “One Horse Open Sleigh” were altered slightly and used for Christmas. The song was published in 1857, when Pierpont was working at a Unitarian Church in Savannah, Georgia.

Despite the fact that his famous holiday composition should have made him a millionaire, Pierpont struggled to make ends meet. His son even renewed the copyright on “Jingle Bells” in 1880, 13 years before his father’s death, but it was never enforced enough to produce any real income.

So in this case it’s ok to go ahead and start singing jingle bells. It is, after all, a thanksgiving song now isn’t it?