Skip to content
Home » Bio » Toys of Xmas Past

I don’t remember ever being disappointed waking up on xmas morning. I look back now on those frosty mornings filled with toys with such great memories.  I thought it would be great to share some of the greatest presents I ever received.  Maybe some of these bring back great memories for you like they did for me! 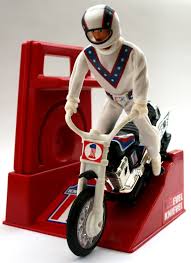 In 1973, New York based Ideal Toys created toys based on Butte Montana’s daredevil son, Robert “Evel” Knievel and history was made! Many thanks to Rob Chatlin for the terrific scans. My brother and I was lucky enough to get one of these each.  I LOVED this toy. You hooked the bike up to a crank stand, cranked a bit and it revved up the friction motor in the toy bike so that the wheels spun.  You slapped a release and OFF IT WENT!  endless hours of annoying crank noise, but once again no batteries required. I think it was about 75 when we actually got one of these. 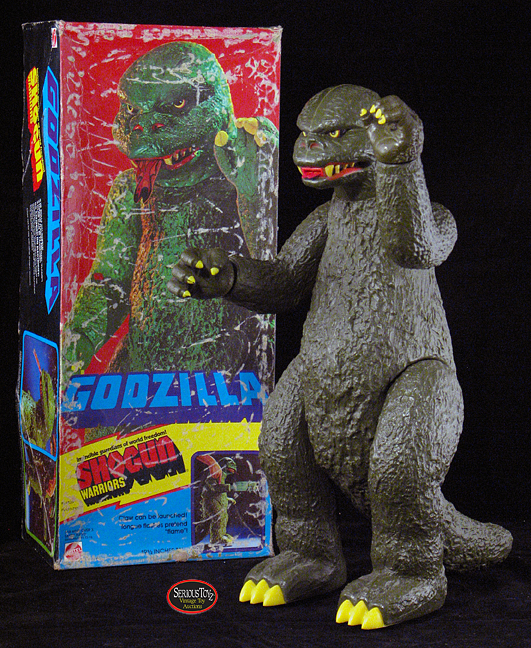 The shogun warriors toys were some of the coolest robots on the planet already but then in 1977 they released the BEAST.  One Christmas morning I woke to unwrap this one of the coolest toys I ever got.  His claws fire off with enough force to knock things down. His tongue flashed a fake flame stream, he rolled on wheels, and he didn’t need batteries. My brother and I spent endless hours roaring and having fun with these toys. I think it was in the early eighties when i got one these. 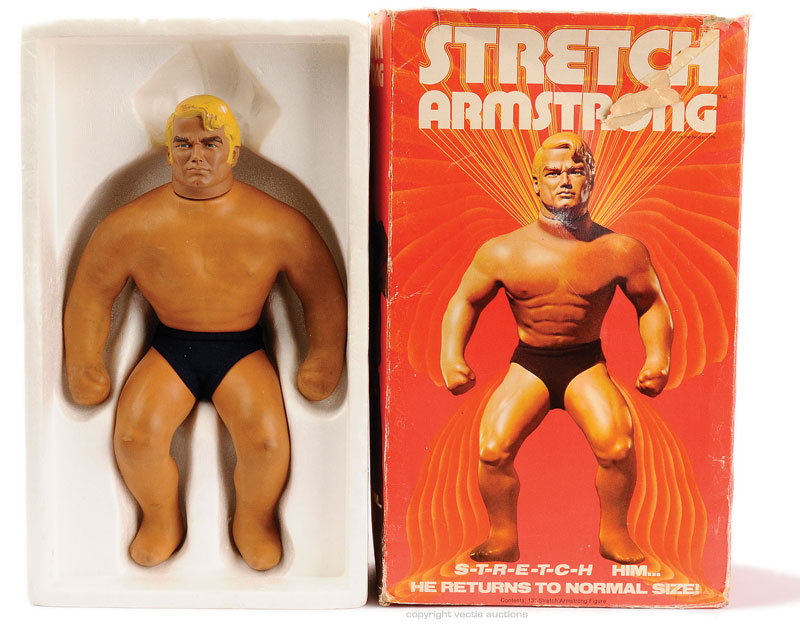 Stretch Armstrong was a large stretchable, gel filled, toy figure invented by Kenner that was made from 1976 through about 1980.  You could pull the dolls extremities from its original 15 inch size out to about 3 to 4 feet.  I spent many a fun filled day playing with this toy.  Its simplicity belies a really fun toy you can do a LOT with.  I wrapped this guy around everything.  My brother got the green monster which I was insanely jealous of.  Love ya bro! 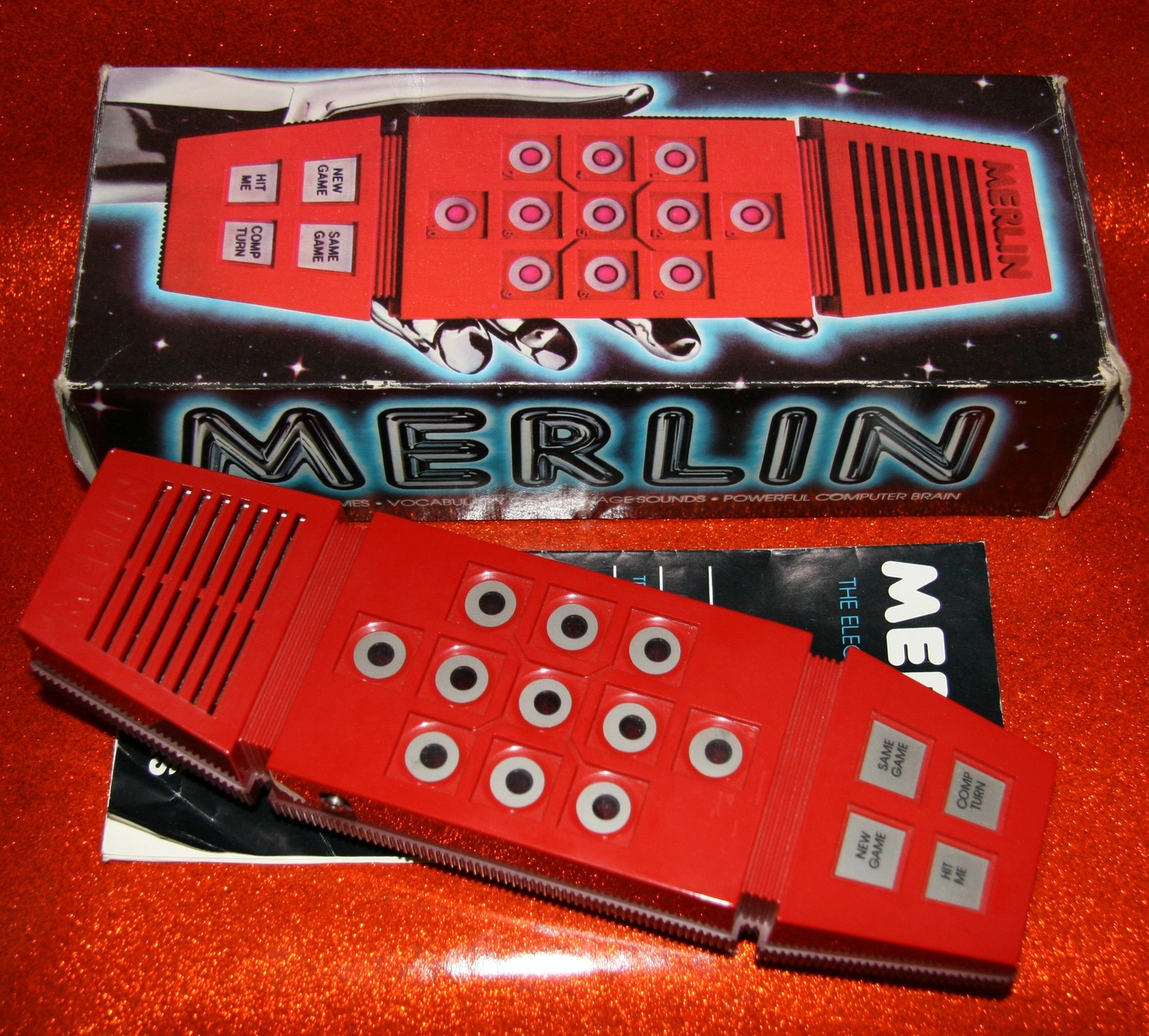 One of the very first hand held electronic games.  It was not just one game but SIX.  Don’t let the seemingly simple buttons fool you. This game was fun.  It was invented by a guy that went to Harvard and worked with NASA.  While it was invented and marketed in 1978, it was in the eighties when I got my hands on one.  I spent hours playing this thing. It is so addictive and memorable that I recently received the updated, re-released version from a friend.  Thanks Jimbo. 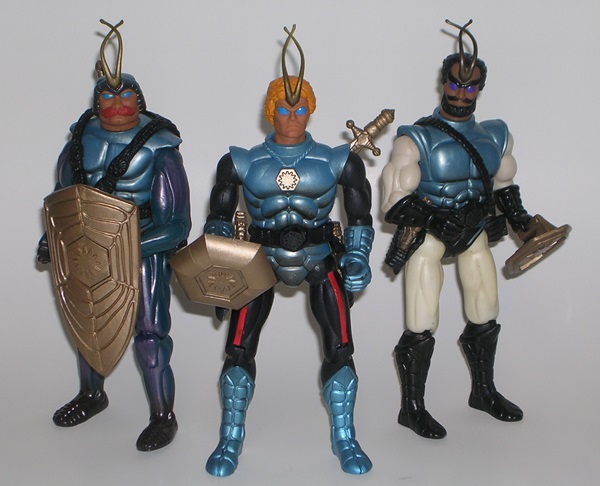 The concept was simple: good humanoid bug people and evil, less-humanoid bug people do battle atop giant insect mounts. But what set this line apart was the fact that many of the ride-on bugs were actually puppets. I had this creepy, hairy spider puppet with a plastic head and a snapping, finger-controlled mandible that I would have enjoyed the hell out of, even if there wasn’t a creepy spider-headed guy riding on his friggin’ back. In the ’80s we got these guys, we got a dragon-head puppet that came with Hordak’s hide-out in MotU. Nowadays, puppets and action figures are kept segregated. Who among us is brave enough to bring them back together? 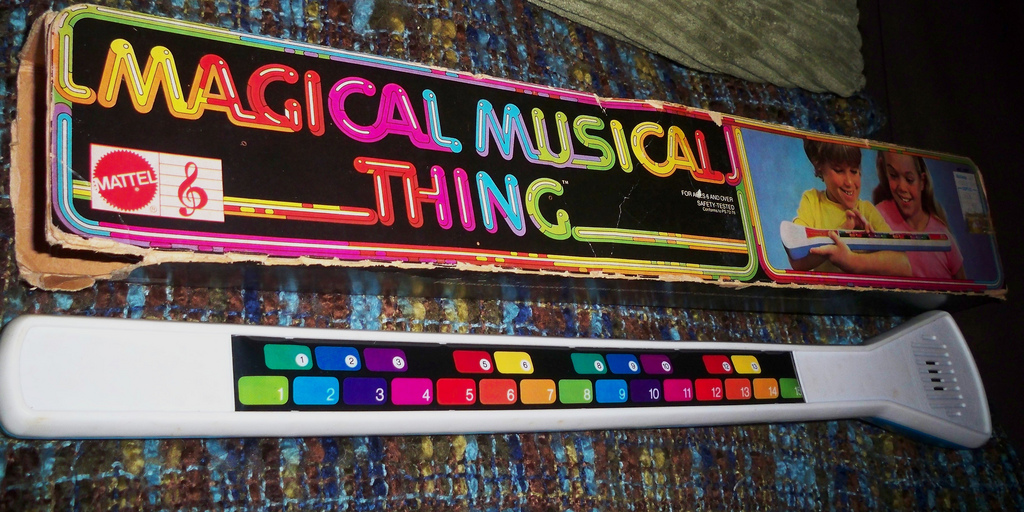 One of the earliest electronic toys I can recall. Sometime after 1978 Mattel created what I consider the precursor to the 80s music staple the keytar. It played surreal, reedy phone-like tones on a plastic membrane pad fretboard, laid out like a piano scale.

In the days before computers, DVD and VHS, this was the next best thing for reliving a movie or a TV show. From Goonies to A-Team, Star Wars to Mary Poppins, they made them all!

So there you have it.  Toys from my childhood xmas memories.  Enjoy!